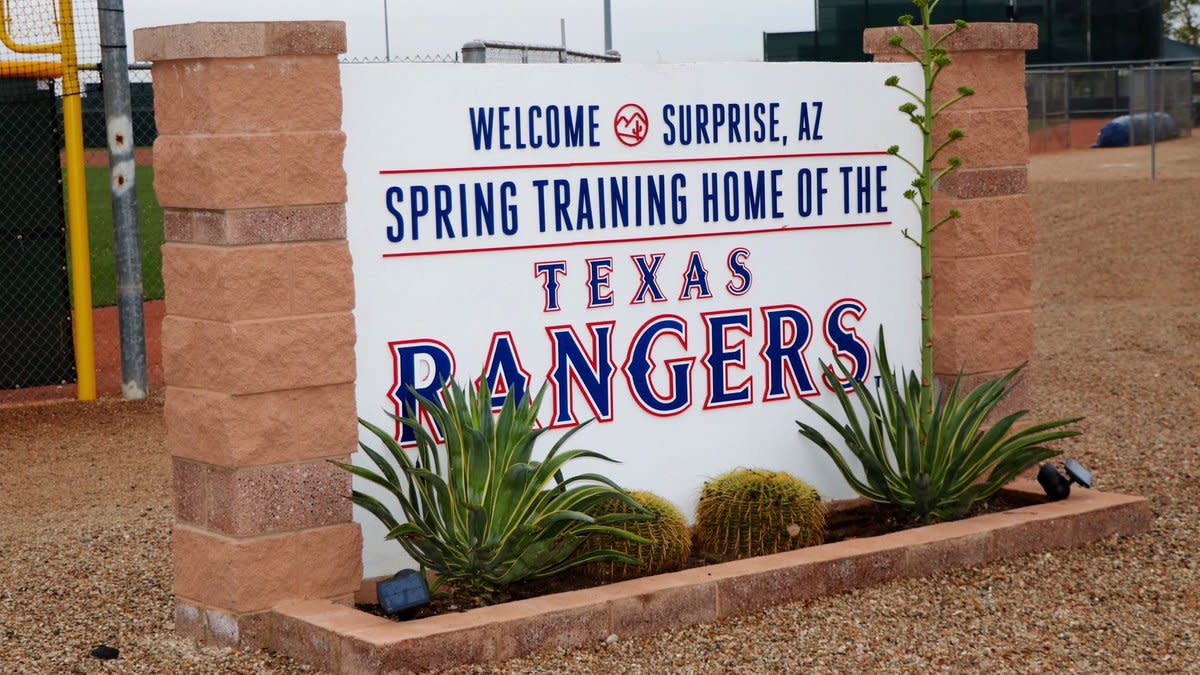 *Hope jumps forever? Really. Tickets to Texas Rangers Spring Training Game sold Saturday morning. The current plan in Surprise, Arizona requires 2,000 fans per game, apparently socially distant. The opener is February 28, which means that baseball and the outdoors and sunshine and summer can not be that far away.

But check your optimism there. Vegas-wise guys who state estimated winning totals for teams have Rangers at 69.5. In other words, 92.5 losses. Ouch.

READ MORE: What the Eagles’ trade with QB Carson Wentz means for Dak and Dallas

Wentz is now a Colt, and I guarantee that Dak – even from a serious injury – could order more than a third round and a conditional second round in a trade.

READ MORE: Cowboys Roundtable: Would you change Dak for the first 3?

In fact … as I say in the above round table, Dak for the first three rounds? No thanks.

* Texas Tiers: What does Rangers’ starting rotation look like?

*Good news: Both the Dallas Mavericks and Stars went a full week without losing a game. Bad news: You know why. For the past 12 months, Mavs has had games suspended due to a pandemic, a protest and a polar vortex. The stars, who play ice hockey, store games because it is too, well, cold and icy. Strange times we live in.

*Sure, it’s a feather in Fedora to be called to TIME“Next 100”, bla bla bla. But if the magazine’s compilation of “future leaders who shape the world” was truly visionary, Luka Doncic would have done so as a 17-year-old prospect instead of a 21-year-old superstar.

He also belongs as a starter in the All-Star Game.

*Like I did, you probably thought at least once during the last cold week “How do people live north like this ?!” The truth is that they say the same thing about us when their summer flirts with 95 degrees.

*Worried trend: Twice in the last eight games, Mavs have lost – at least in part – due to a defensive error communication in the declining seconds.

For a Rick Carlisle-trained team, it is both characteristic and alarming.

On February 1, the final possession against the Suns allowed the Dallas Devin Booker to take and make a game-winning 3-pointer. Mavs had a foul to give, would use it, but did not. And in their recent loss to Portland, they were told to double the team from Damian Lillard’s hands. Of course it did not work and he burned them with a triple. Almost comically, Carlisle accused this decay of the “noise” of the American Airlines Center. With less than 4,000 fans in the stands. Lame. Worried.

*Think about how our sports react to harsh weather today. Warnings. Delays. Cancellations. Above all, security. Now listen to an unknown, naive world in the 1970s.

No. 1: Yes, when I was 10 years old, I was looking forward to a game every summer between the defending Super Bowl champions and a team of college all-stars.

No. 2: They were a little more cordial then. Wow!

*Old-school Mavs fans remember James Donaldson, the 7 feet left that went toe to toe with Kareem during the 1980s playoffs with the Lakers. For the past five years, he has undergone heart surgery, a coma, his mother’s death, his marriage crumbling, suicidal thoughts. The work.

But now he is back on his feet and helping the community in his hometown of Seattle. Promising rebound for a good guy with the second most rebounds in Mav’s history.

*It’s really secondary to me what Perseverance Rover accomplishes on Mars. I’m just amazed at the fact that we can launch a spaceship traveling 24,600 km / h in seven months and land it within an eighth of an inch where we calibrated. Mars is 300 million miles away. Mind = Blown.

*Rolling blackouts. House on fire due to no running water. Citizens are literally freezing to death. Let this disastrous week serve as a reminder to our Texas yahoos who constantly want to “separate” from the union. We isolate our energy network from the rest of the world, rely on fossil fuels and then … splat. It happens. Texas is now number 1 in the United States in terms of crude oil, natural gas and is unprepared for the winter.

*Dead ‘n gone: Rush Limbaugh. My tribute? He was a terrible man. Good riddance. The end.

*This weekend? Friday night let’s go crazy and bring in the Dallas Symphony Orchestra. Saturday is for tennis. On Sunday, there is an intimate family birthday party. Do not always be a stranger.