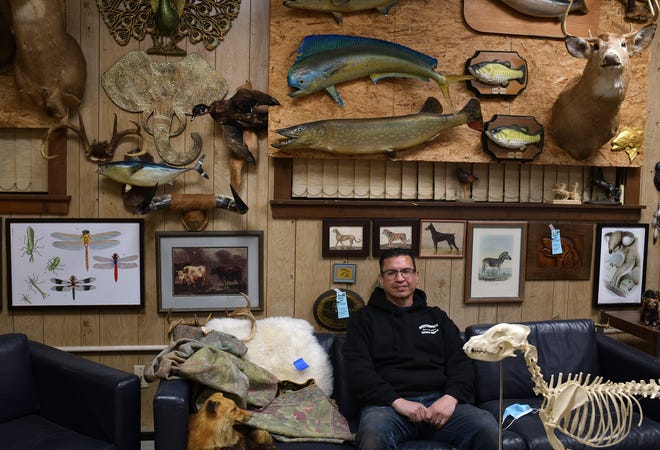 WORCESTER — Christian Bale’s desk and Jennifer Lawrence’s kitchen from “American Hustle,” a locker to store proton packs (the primary ghost-capturing device) from 2016 unsuccessful reboot of “Ghostbusters,” the dinner table used by Liam Neeson in “Honest Thief” and  Adam Sadler’s coffin in “Hubie Halloween” are some of the oddities that pop up at Westerman Prop Warehouse.

Chances are, if you’ve watched a movie, TV show and streaming series that was filmed in New England in the last 15 years, a scene featured a prop or set from Westerman Prop Warehouse.

If the project was filmed in Worcester, it’s a given that Westerman was involved in the production.

And like the movie business in Massachusetts, business is booming at for the prop house.

Massachusetts provides filmmakers with a highly competitive package of tax incentives: a 25% production credit, a 25% payroll credit and a sales tax exemption. Any project that spends more than $50,000 in the commonwealth qualifies for the payroll credit. Spending more than 50% of the total budget or filming at least 50% of the principal photography days in Massachusetts makes the project eligible for the production credit and the sales tax exemption.

Because of the incentives, Dan Diaz, manager of Westerman Store and Restaurant Equipment and Westerman Prop Warehouse, said so many movies are coming to the area.

“In the beginning, movies were going to LA or they go to New York and now they can stay all within the Worcester, Mass., area,” Diaz said, “and we really have a whole film industry that they can get everything they need right in Mass.”

Under the same roof as Westerman Store and Restaurant Equipment, the Westerman Prop Warehouse has enough Christmas decorations to dress up a whole town (as it did for “Joy,” filmed in Lowell and starting Jennifer Lawrence) or a toy store (as it did Bruce Campbell’s up-and-coming “Black Friday,” shot in North Attleboro).

Even though they have plenty of props, Diaz often buys props from productions after they wrap up filming in the area. This includes a life-size replica of a thoroughbred horse and a pair of coffins, all of which they acquired from the “Castle Rock” people, which Westerman also provided props for.

“That coffin here and this coffin, you notice, are identical,” Diaz said. “Let’s say there’s a scene that they buried the body there but 10 years later they dig it up. That’s the one that been in the ground.”

Despite the abundance of stuff spread out on five floors, Diaz said they probably had 20% of their prop inventory currently out on movie sets.

“Right now, we’re doing ‘The Tender Bar,’ which is big. We have ‘Don’t Look Up.’ That’s another big one. We’re working on ‘Dexter.’ They have a lot of our stuff,” Diaz said. “Dexter, I never realized how huge of a following it had. I have never gotten so many requests asking, ‘Hey, can you get me on the set?’ Well, I can now say with COVID, I can’t.”

Walking around the warehouse, one easily notices that plenty of props are tagged to be shipped to George Clooney’s “The Tender Bar,” a drama based on the best-selling memoir by J.R. Moehringer that recounts the writer’s adolescent years in search of a father figure among the patrons at his uncle’s bar in Long Island.

“George Clooney’s ‘The Tender Bar’ movie I think has been the most (props) for any show that’s been done here (in Mass.) collectively,” Diaz said. “We’ve done more for bigger shows but they also got a lot from other places.”

While he’s isn’t Mr. Hollywood, the easy-going, enthusiastic Diaz certainly speaks the lingo and he’s on the same footing with the Hollywood counterparts.

“The way it works is the designers or the decorators come here,” Diaz said. “They pick their stuff. And then they send a truck with set-dressers on it. They load the truck. They go to wherever the set is, either the studio or the stage or the location. They dress the set. And then they take it out back, goes back to the shop and then it goes back here.”

Founded by the late Stephen Westerman in 1959, Westerman Store and Restaurant opened a 125,000-square-feet warehouse (the former Standard Yarn Co.) on Suffolk Street in the ’80s.

Westerman Store and Restaurant Equipment got in the movie prop business in a big way with “Shutter Island,” filmed at the former Medfield State Hospital.

“ ‘Shutter Island’ is the first we did. That was big for us,” Diaz said. “If you watch the movie, it was an open kitchen in an insane asylum. So I said, OK, a kitchen in an insane asylum, you would have just a cafeteria and table and chairs. The tables, at least, would be bolted down. You wouldn’t have hanging pots and pans. You wouldn’t have anything. You wouldn’t have the kitchen visible. It would be all locked down. It would be in a whole different area but they wanted an open kitchen. We just mentioned it as a professional courtesy and then they said this is the way we want to do it. That’s perfect. We do what we’re told, whatever they want.”

Diaz said the first prop rented that wasn’t restaurant equipment was an old TV set that happened to be in the warehouse.

“We were working on a restaurant scene for a movie called ‘The Judge’ in Shelburne Falls and they just needed a TV for a scene,” Diaz said. “So the decorator was here. She was the buyer at the time. She saw it and said, ‘Hey, can we rent that?’ So it just, kind of, worked out.”

For “Julia,” a new HBO Max series based on the life of “The French Chef” filmed in Worcester in March 2020, Westerman Prop Warehouse provided a display wall of vintage television sets (among other things) to help transform the old Denholm Building into Jordan Marsh in Boston’s Downtown Crossing.

While it started exclusively doing restaurant scenes, Diaz said Westerman Prop Warehouse now considers themselves as the one-stop shopping place for every sort of movie props.

A giant, light-up globe from the ‘60s or ‘70s that might have been featured on an episode of “Murder, She Wrote,” a replica of John Singleton Copley’s 18th-century oil painting “Watson and the Shark” used in “Knives Out,” set pieces used in 2019’s “Little Women,” a rack of Boston Police uniforms used in “The Town,” a blood-splattered, bullet-ridden Russian religious icon from “The Equalizer,” courtroom chairs used in “Defending Jacob’,” a street mailbox used in “Julia” that is being shipped to the set of “The Tender Bar” and the prison phones that Mark Wahlberg used to talk to inmate Post Malone in “Spenser Confidential” are some of the props inside the warehouse.

it also has a “Spy Room,” with wall-mounted display cases of an artillery of firearms and weapons (used in Netflix’s “The Sleepover”), and enough medical equipment (including exam tables, EKG machines, bandages and bags of fake blood plasma) to recreate Clooney’s old stomping grounds on “ER.”

Diaz also has plenty of stuff to personalize one movie character’s home.

“When we did Whitey Bulger’s mother home in ‘Black Mass,’ ” she loved cats and she had all these little cat tchotchkes, 200 cat tchotchkes on the set,” Diaz said. “And she was very religious so we had a lot of religious stuff in the background.”

Diaz said there are no lengths that he won’t go for the satisfaction of a customer.

“When somebody calls me and says, ‘Hey, I need a carriage from the ‘40s,’ I’ll find it. And then we’ll just go buy it. You don’t know how many times I’ve been out 4 in the morning going to buy something that, three hours later, has to be on set,” Diaz said. “But if it doesn’t look right, you as a consumer will see that. So you want to do the best job that you can to aesthetically make it look pleasing. Sometimes the actors and the camera crew walk onto a set and go, ‘Oh, this just looks like a bar from the ‘50s.’ Yeah, OK, we did our job.”

And with this vast inventory of props, the most requested item to be used for a movie set are, believe it or not, plastic lawn chairs.

“Watch any movie,” Diaz said. “You either find there’s a motel scene that has plastic chairs outside or you’re at Beatty’s house and she got the whole furniture outside. Plastic outdoor furniture pops up in every single movie.”

Despite the coronavirus pandemic, Diaz said Massachusetts is bringing more films than ever before.

“The way they handed COVID compared to other places, the film industry is really liking it,” Diaz said. “Also, the tax incentives are just a big draw, plus the fact that you have the comfort level that things are being handled properly by not just the government here but the people. You have places like us finally opening up and you have so many businesses that actually cater to that now that you can come here and pull off some major films. But, if you don’t have a tax incentive, zero of these movies film here.”

Although he wasn’t specific, Diaz said Westerman Prop Warehouse is fair with its pricing on movie prop rentals, owing much to its success.

“We have restaurants that we’ve dealt with for years and years and years. We’re not like a store where you see someone different every day. We build relationships with our restaurant equipment. It’s the same with the film people. Sometimes they have a bigger budget so they can pay. Sometimes they say they need a favor. That’s what we do,” Diaz said. “Everybody has a different budget and I just want to make sure that they get what they need,. I work with local people. If it helps them get what they need. It looks better for them and on their résumé, it helps us as well.”

Although he insists he never gets star-struck by seeing actors, Diaz and his wife were extras opposite Ryan Reynolds when they filmed a scene for “Free Guy” at Brew on the Grid on Portland and Franklin streets.

As far as he is concerned, Diaz said everybody’s there just to do a job.

“When I was on the set of ‘Grown Ups 2’ (which Westerman Prop Warehouse provided the necessary items for an ice cream stand), I’m sitting next to Salma Hayek. Kevin James was there. Adam Sandler’s there. David Spade was there. Chris Rock was there. So we’re all just sitting there with the crew at the picnic tables,” Diaz said. “You just work. You don’t want to be obnoxious about it. It’s just, do your job. They do their job. Everybody gets along.”

Diaz, who was fielding calls all day long on this particular day from set dressers and prop people from “Don’t Look Up,” “The Tender Bar,” “Dexter” (being filmed in Central Mass.) and “American Horror Story Season 10” (being filmed in Provincetown), said at least a dozen film projects are coming into the Bay State in the next six months, including the return of “Julia” and Will Ferrell and Ryan Reynolds’ musical reimagining of the Charles Dickens’ classic “A Christmas Carol” for Apple.